The chief assisting to oversee the attempts to find the remaining victims of the Miami building collapse had a message for the families of the 159 individuals who were still missing as of Friday.

Don’t give up hope.

Miami-Dade Fire Rescue Chief Andy Alvarez teared up when he spoke to CNN’s Wolf Blitzer and stated that there’s always hope and every effort is being made to save your relative.

He added that the rescue attempt is among the most hazardous things he’s ever done. Concrete is collapsing around some team members as they make their way through the holes in the debris as they hack into the walls to locate new entrances. 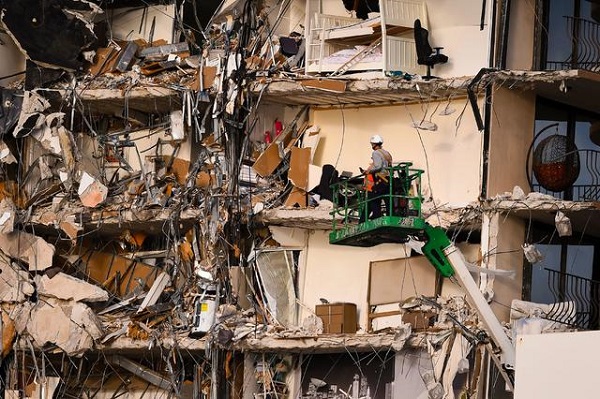 Meanwhile, other family members are at a reunion facility, where they hope to meet their lost loved ones. Some have volunteered to provide DNA samples to aid in the identification of victims.

Many concerned families have approached state Senator Jason Pizzo, who claimed he has been communicating with them.

He said that it is complete devastation. He asserted that the rescue and search is still going on but when the families come across the debris they believe nobody is listening to them because they can’t see any movement.

Chief Raide Jadallah said that three corpses were recovered overnight into Friday in the debris of Champlain Towers South in Surfside, Florida, with another body discovered earlier in the week.

After investigating the site of the accident, the medical examiner’s office was able to identify Stacie Fang as a victim who died in the building collapse.

The Fang and Handler family released a statement to express their sincere sorrow at Stacie’s death, saying that there are no words to explain the terrible loss of her and that they want to convey our most heartfelt gratitude for the abundance of concern, sympathy, and support they have received.

In the press conference, Daniella Levine Cava, Miami Mayor, said that the number of individuals unaccounted for had risen to 159.

The mayor said at a press conference Friday afternoon that 159 individuals have been identified as potentially being on the premises and they are individuals who may or may not have lived there, but they just don’t know.

Firefighter Dr. Howard Lieberman said that teams were contacted Thursday and informed that there was tapping, and it went on for a long time, subsequently dissipating by the end of the day.

Lieberman said that the rescue and search has been very emotional for the team, as they discover personal items from the wreckage of the Miami Building.