An earthquake of a 4.8 magnitude struck Southern Puerto Rico on Thursday, May 2020.

It was first felt near the Southern town of Guayanilla and its depth was recorded 7 miles (12 kilometers) according to the United States Geological Survey. The initial magnitude was recorded as 5.1 at San Juan, the capital of Puerto Rico.

This is not the actual earthquake but is one of the multiple aftershocks of the early January earthquake with a magnitude of 6.4 along Puerto Rico’s southern coast, which caused damage of millions of dollars and killed one person.

The island has been shaking by the series of aftershocks of the same earthquake. It is predicted that the earth will move by the end of the year. Tremors from 4.7 to 5.0 magnitudes rattled the island last year and continued shaking for a week.

On May 2, an earthquake of a 5.4 magnitude struck about four miles offshore in Tallaboa, according to USGS.

The USGS estimated in January that these aftershocks would persist for years or for decades. Thousands of aftershocks are expected, hundreds of which are expected to be of a magnitude of 4.0 or greater, according to research at the University of Puerto Rico. 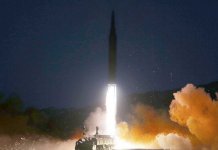 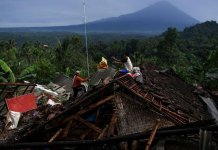