With the elections in November, the Trump administration has clearly hinted that they are not in going to give election aid for states and an emergency bailout for the U.S. Postal service, which makes it evident that the rights of voters are being suppressed intentionally.

The attacks are mainly targeting people of color particularly Black people. Trump has refused to provide federal aid to COVID-affected states – which is needed to ensure safe, free, and fair elections.

Moreover, there are various approaches being employed which are considered as suppression of voting rights like miles-long lines at the polling stations, broken voting machines, inconvenient voter ID laws, destruction of the postal service, and voter roll purges. It appears that these approaches are intended for people of color amongst other restrictive policies.

The Trump administration is fixed on voter suppression as these tactics discourage people from voting because of everything they have to endure just to cast their vote. 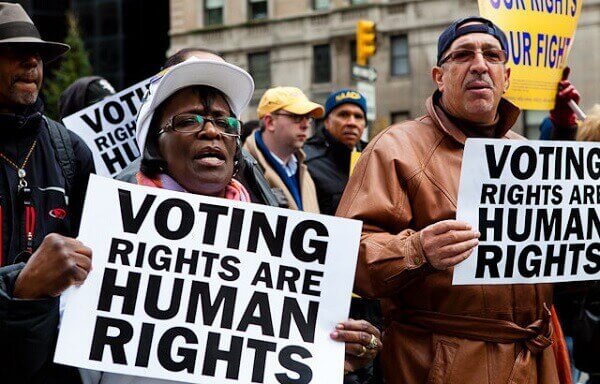 Further tactics have been used to act as barriers to voting for Black people. Trump will also be appointing police officers on the day of the election to intimidate and discourage non-Trump voters.

Moreover, mass incarcerations of Black people as well as literacy tests are also among many schemes to hinder votes. The safety precautions that must be taken amidst the coronavirus pandemic add to the complications on Election Day.

Considering the situation, it is imperative that action must be taken to counter the efforts of the Trump administration to make sure that everyone can vote safely and fairly.

Black women specifically face more hurdles to exercise their voting rights because of the additional socioeconomic issues and systemic inequalities.

Access to early voting and mail-in ballots must be provided as people cannot risk being exposed to coronavirus and face complications associated with it, especially Black communities.

Black women, like every other US citizen, must have equal voting rights and they should fight against any and all attempts to suppress their votes and must stand united. They must also mail their ballots early to avoid any hindrance in the U.S. Postal Service does not cause problems in the voting process. Absentee ballots should also be requested as soon as possible.