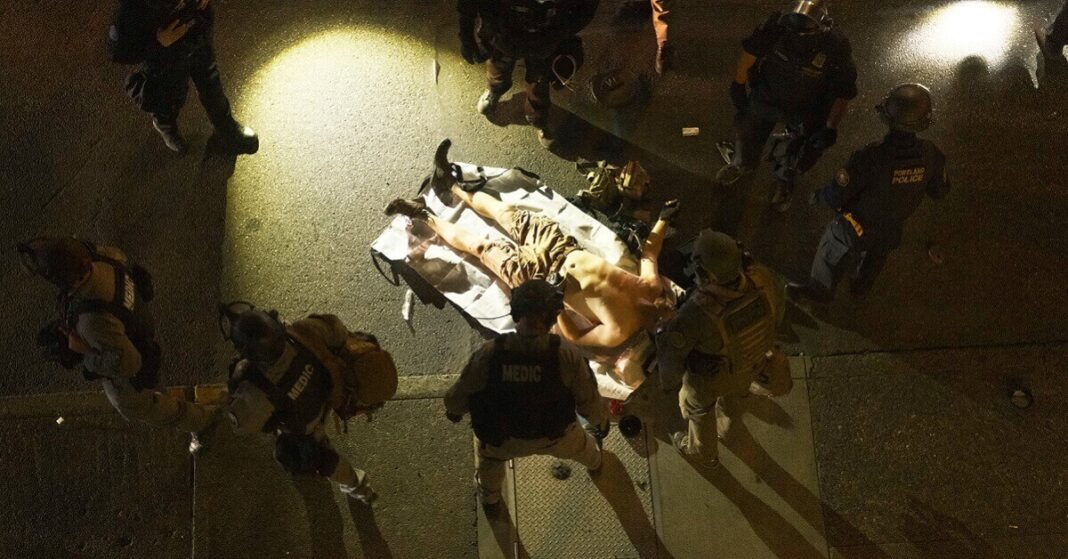 The shooting happened around 8:45 p.m. and the victim was a Trump supporter. Portland has been experiencing demonstrations for two months that end in riots and vandalism.

A man died on Saturday in Portland, Oregon, after being shot during clashes between protesters from the Black Lives Matter (BLM) movement and supporters of President Donald Trump.

A pro-Trump rally, which drew hundreds of trucks with thousands of supporters to the city. Supporters of the US president and anti-racist protesters staged several clashes in the streets, with pro-Trump people firing paintball guns from trucks, while BLM protesters responding.

The shooting occurred around 8:45 p.m. according to the police, who have opened an investigation into what happened.

A political rally is caravanning throughout downtown Portland. There have been some instances of violence between demonstrators and counterdemonstrators. Officers have intervened and in some cases made arrests.

“Portland Police officers heard sounds of gunfire from the area of Southeast 3rd Avenue and Southwest Alder Street,” the statement said. “They responded and located a victim with a gunshot wound to the chest.”

Although the police have not given more details about what happened, a video broadcast on the Internet shows a group of people in the vicinity of a parking lot, when the shots heard and a man falls to the ground. The deceased was among the group of people who demonstrated in favor of Trump.

The shooting puts Portland back in the spotlight as the epicenter of anti-racist protests that lead to violent acts.

The city celebrates two months of protests, which often end in police riots, which began after the death of George Floyd at the hands of police in Minneapolis in late May.

In the early morning of August 17, several BLM protesters gathered in front of the Portland Police Station, stormed in, and set fire.

This Saturday, the clashes were aggravated by the pro-Trump demonstration called by his followers. The police had to intervene during the quarrels, identifying and arresting some of the participants.

Right-wing demonstrations have also emerged in the city in recent days, and Trump has repeatedly highlighted the Portland riots as “evidence” of the need for a tougher law-and-order response to the protests by the police and racial violence.

The month of July Portland has seen the largest increase in gun violence in thirty years. During July, 15 people were murdered, and so far these years 24 have died and there have been 63 shootings.