Explore Which is the Smallest State in the United States

If we look at all the places that are talked about most, you will wonder most of them are either huge places or have substantial wealth spent on them. Look at the Seven Wonders of the World as well. But good things are in small sizes too. We are talking about Rhode Island, which is the smallest state in the US.

It isn’t one big island rather it is a collection of many smaller islands. As stated in the name, it’s a collection of islands surrounded by miles of saltwater. The total area that the state covers are about 1,045 square miles.

Origin of the Name

Even though Rhode Island is the smallest of all the states found in the United States, but it has the longest name. It has been named “The State of Rhode Island and the Providence Plantations”. But many people for their convenience call it Rhode Island for short. Another interesting fact is that it also goes by the name of “Little Rhody”.

There is also a very interesting story that surrounds the name of the island. Many people have different versions of the story, but one that occurs commonly is that a person named Giovanni da Verrazano, was an Italian explorer. In 1524 he was on an expedition and came across the island and met the tribe that lived there, the Narragansett people. Upon looking at the island closely he made a comparison of the island with that of the Isles of Rhodes located in the Mediterranean Sea.

This was just one of the stories that have been revolving around. In another version of the story Adreian Block, a Dutch explorer, was the one who came across the island. This was back in the year 1614. He saw the island and named it “Roode Eylandt’. He names it as such because of the rocky red rocks that surrounded the island and hence the name came to be.

Since the islands are surrounded by the sea, it gives an immense advantage concerning trade and tourism. The huge water body that surrounds the entire state is a vital asset for the region. 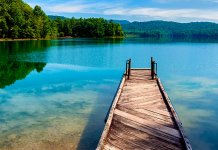