Globalization, in simple words, connects all the nations and opens ways for easy trade as well as encourages an exchange of economy, human interactions, goods, cultural norms, ideas, and technology, etc. After WWII, the US and the Soviet Union were the two main superpowers. However, the US eventually dominated the Soviet Union and emerged as the world’s most powerful nation. From the 1950s onward, the US economy strengthened its position as the world’s most powerful country, with the single, most influential economy. By 2015, the impact of globalization on the US economy in employment was tremendous and it became the source of almost 22% of global output with one-third of global stock market capitalization.

Impact of Globalization on US Economy

It happens through some of the following important channels: It allows US manufacturers to move their production lines to other countries where labor wages and manufacturing costs were less. The US export sectors especially took the maximum benefit from the foreign value that adds up because of this. 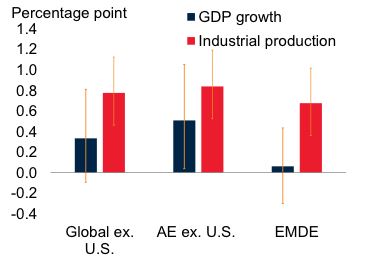 Technology and innovation are a growing sector of the US economy, and globalization has largely benefited this area through the inflow of ideas, technology, and money. The global markets welcome all such innovative ideas and technological advancements, and this has a major impact on the US economy. Around 65% of the world’s 25 most dominant tech firms are based in the US, which is responsible for around 82% of the total market capitalization.

Around 55% of the companies that now worth around $1 billion or more were projects of immigrant entrepreneurs. The majority of successful companies have 82% of immigrants in key managerial roles. All of this was made possible because of globalization.

Before the COVID-19 pandemic, the impact of globalization on the US economy in employment was quite huge and one reason was the opening of more job opportunities due to foreign start-ups and ventures.

Globalization and trade liberalization policies by the US have greatly benefited the country. Due to globalization, from 1947-2003, around 11-14% of the US GDP increased, and by 2018, the US GDP rose from $11 trillion to $20.5 trillion.

Because of its powerful economy and stature, the US has a huge impact on the global economy. The policies of the country have promoted globalization which led to an increase in collaboration with other countries. Currently, the US currency dominates every global market and global trade flows. The US owns one-fifth of global stock and is responsible for almost one-fifth of the global biofuel industry.

The US Dollar: World’s Preeminent Currency

It is one of the most powerful currencies in the world and is used in almost all global trade and transactions. Except for Europe and Central Asia where the Euro surpasses the US dollar, all other countries carry on trade transactions with the US currency.  Most of the countries use the USD to peg against foreign exchange reserve rates. Also, it is noteworthy that almost 63% of foreign exchange reserves are dominated by the US dollar. So, it is quite evident that the US economy has a very important role in the world’s economy owing to globalization.

The US is the largest international debtor and creditor. Because of the economic interdependence and strong global ties, if the US economy suffers a shock, the world’s economy through commodities, trade, cross-border bank flows, etc. also suffers.

The US has highly synchronized business linkages with other economies. When there is an expansion in the US economy; growth sectors and economic expansions happen in other countries too. The same is for recessions. All the major global recessions coincided with the US recession.

Impact of Globalization on US Economy – FAQs

How has Globalization affected the US Economy?

By 2019, with an increment in annual GDP and through global interactions, the level of poverty and unemployment had decreased before the coronavirus pandemic hit the world. However, it is important to remember that globalization has substantially contributed to an increase in employment through multinational organizations, increasing the number of products and services, and lowering consumer prices. Globalization has also increased the importance of the US dollar and in turn, provided other organizations the opportunities to tap into the financially strong markets.

What Role does the US play in a flourishing Global Economy?

If we say that the US has transformed the global economic world, then it will not be wrong. They are the largest international creditors and debtors, and because of their massive influence and global ties with other countries, there is no denying that the US economy plays a major role in nurturing the world’s economy. Through its effective economic and monetary policies, the US has certainly become an economic leader of the world with its exquisite competitiveness, technological development, and productivity growth.