Juno is NASA’s spacecraft that was launched on the 5th of August 2011 from Cape Canaveral, Florida. The station reached the orbit around Jupiter on the 4th of July 2016 and recently it has contacted Earth with a successful science flyby of the gas giant, Jupiter. There are many close-up pictures of the station’s flyby showing the planet’s colorful cloud tops and composition.

Juno is in a polar orbit around Jupiter and most of its time is spent away from the planet. However, once in 53 days the station reaches above the north pole of the planet and flies from north to south and thus is able to observe the plant pole-to-pole. During the flybys when it’s above the north pole of Jupiter, it captures pictures of the atmosphere, structure, origins, and the magnetosphere of the planet and sends the data to Earth. On 29th October 2018, the spacecraft completed the 16th close flyby of Jupiter and captured amazing images of the scene there.

The images showed swirling clouds over the North Pole of the planet. In another picture, there was a small point noticed near Jupiter, which is the moon, Io. According to NASA, Io is the most volcanically active object in the Solar System. At the time when the picture was taken, Juno was 18400 kilometers away from the peak of the clouds of Jupiter. Io, Jupiter’s moon is slightly larger than the Earth’s moon and is rocky and has hundreds of volcanoes. There are two other moons named Europa and Ganymede but they are farther away from Jupiter’s orbit.

Io is the third-largest moon of Jupiter and is ranked 5th in terms of distance from Jupiter. The remarkable activity of this moon is its precisely timed pull due to Jupiter’s gravity. Io is also subjected to many tidal forces because of the widely varying distances. In another image obtained from the 16th flyby of Juno, there was a ‘white oval’ seen that is believed to be an anticyclonic storm. Some pop-up clouds of bright white color were also observed to be floating above Jupiter.

The images were captured through JunoCam and they were created by the citizen scientists Gerald Eichstadt and Sean Doran through the spacecraft’s imager. The spacecraft will orbit around Jupiter for several more years and will capture Jupiter’s images and send them to earth. After the completion of the mission, the station will be destroyed. 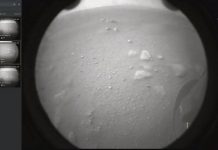