During The Nick Cannon Show, America’s Got Talent host confirmed his son’s death cause saying, he had died due to a brain tumor. He called the show episode a “celebration of life” for his 5 months old who died last week.

Cannon recalled the time when he and partner Alyssa Scott had been told that their child had hydrocephalus, a condition in which fluids accumulate in the brain.

Despite undergoing major surgery, his son’s life took  “an interesting turn” around Thanksgiving as that was the day when the “process sped up”.

Cannon recollects the time when he took Zen to the ocean and held his hand for the last time before his death.

“You can’t heal until you feel” the comedian expressed his emotions about the unrecoverable loss he has faced. The rapper received tremendous support from netizens on the tragic death of his son.

“I am praying for you brother, this is such heart-breaking news,” noted another. “You all will get through this together. Just know you aren’t alone. You have people who loves you and will hold your hand through this process.”

The Masked singer reminded of the time when he and his spouse took Zen for a checkup for what they thought to be a harmless sinus issue. However, there they came to know that their son had a brain tumor that required immediate surgery.

In June, The Wild ’N Out stars announced the birth of their son. The comedian is a dad to 7 children, including late son Zen from Alyssa Scott, 10-year-old twins, Monroe and Morocco from Mariah Carey, four-year-old son Golden, 11 months old daughter Powerful from Brittany Bell, and 5 months old twins Zion and Zillion from Abby De La Rosa.

On Tuesday, the mourning father posted a video on Instagram showing his little one,  “Can you say, ‘Good morning, Daddy?’” she asked her baby boy in touching footage as he cooed. “Say, ‘Bye-bye, Daddy.’ Wave bye-bye.” 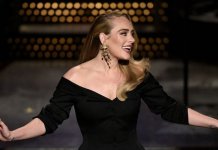