According to authorities, a toddler was gravely wounded after being attacked by a coyote on his house’s front porch in Dallas, Texas, on Tuesday morning.

Following the assault on the two-year-old, the prairie wolf escaped into a neighboring park, where a responding officer opened fire, according to authorities.

The coyote, however, ran off into the woods, where it was pursued by a game warden, according to officials.

The deadly canine, according to wildlife specialists, was being fed by inhabitants of the community north of White Rock Lake; otherwise, it would not have approached a human.

In an interview with The Associated Press, Robert Timm, a retired wildlife biologist, said that “the lack of fear of humans can be disastrous for the coyote.”

Timm was a co-author of an academic article that discovered that coyotes only attacked people 142 times between a period of 1960 and 2006 in the United States and Canada combined.

Attacks like these “are not just rare, they are exceedingly rare,” said Sam Kieschnick, a state urban wildlife biologist who works in the city.

The coyote attack in Texas came a week after a toddler was attacked by a coyote on a California beach while 2 adults were just feet away.

In the footage, one of the small girl’s guardians was able to successfully shoo the animal away after approximately 15 seconds.

Due to the scary incident, the tot had significant but non-life threatening injuries that required medical attention. 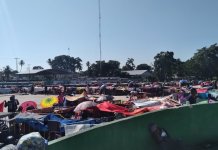