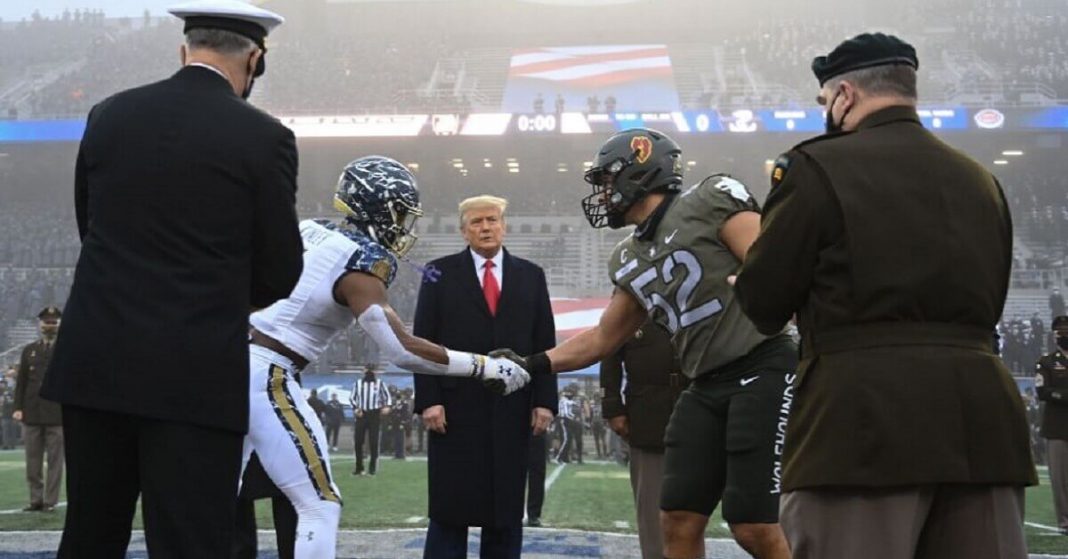 President Donald Trump attended the Army-Navy football game held at Lincoln Financial Field where he was met with a roaring crowd and a round of applause.

As reported by the Capital Gazette, the president was accompanied by superintendents from the serving academies. As the crowd spotted Trump, chants were heard from all across the stadium.

During the national anthem, Trump joined the players from both teams on the field. He then proceeded to move towards the midfield, all the while waving to his supporters in the stands.

He participated in the coin toss while his security personnel surrounded him. As he tossed the coin, the crowd erupted into cheers. Before the kickoff, video footage of the president signing a football in the Oval Office played on the big screen for the crowd to enjoy.

In the first half of the game, the president was attending from the army side where he was joined by the Defense Secretary as well as other military top officials.

After halftime, Trump joined the navy on the other side. The crowd could be heard chanting praise for the president as well as calling for four more years of his presidency. During intermission, Black Hawk helicopters passed over the stadium while the president watched it with the crowd. 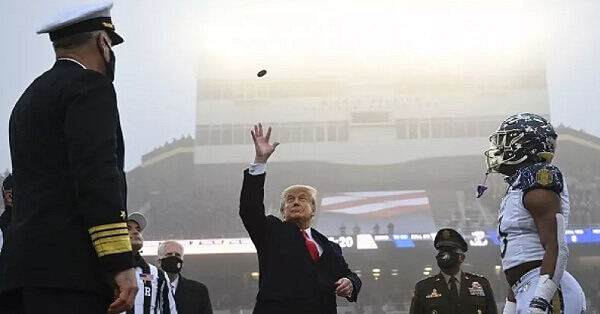 While the president was leaving the stadium a little after 5 pm, he was gifted a football from paratroopers who were supposed to be present before the game, however were not able to because of bad weather conditions.

Trump also visited the army’s locker room before the game to greet the players, shake hands with them and, to give them a pep talk. He also spoke about his new policy where athletes are now permitted to play professional sports and are not obligated to abide by their service commitments first.

He proceeded to visit the navy locker room next and also announced the new policy to them. He congratulated the Midshipmen and encouraged them to win today’s game against the army as well.

This is the third time Donald Trump has attended an Army-Navy game. The first time he attended when he was elected as the president in 2016 and followed by that in 2018 and 2019.

Nine other presidents have also attended these games in the history of the US. According to Newsweek, Harry Truman was the only other president who was present at more Army-Navy games than Trump.

IRS Gave three checks to some Taxpayers this month! See Why!