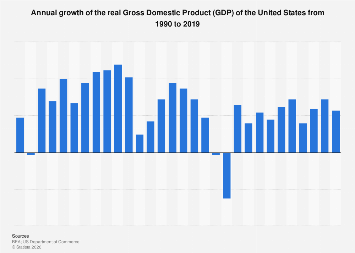 If you need to find out how healthy a nation’s economy is, then looking up that country’s Gross Domestic Product (GDP) is the way to go. For those of you who are unaware, a country’s GDP helps in keeping track of the financial value of all the services and products produced within that country between a specific time period. It is the sum of government spending, private investment, personal spending, and exports.

As per the International Monetary Fund, the USA emerged as the biggest global economic force in 2019. So, let’s dive a bit more into this and go through the US Economy growth rate by year.

The Annual US GDP Growth Rate Speaking specifically about last year, the US GDP growth rate was recorded at 2.33%. While this percentage was sufficient to put the US above the rest of the countries in terms of economic health, what many people failed to notice was that this 2.33% growth rate was down 0.85% from the last year.

Moreover, what’s concerning is the fact that the US was averaging impressive GDP growth rates back in the 50s and 60s with percentages over four.

US GDP Growth Rate by the Year – Key Takeaways

In 1984, the US recorded a whopping GDP growth rate of 7.24%. While it seems like a gigantic figure in the current times, it was only a 2.65% increase from the year prior. 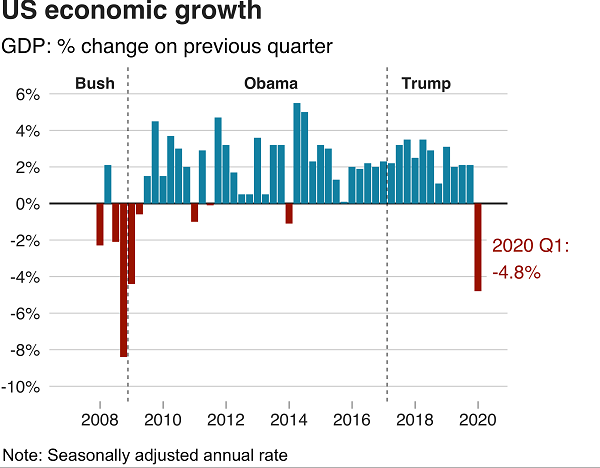 Given below are the yearly US GDP growth rates since 2015 as well as the respective changes from the year prior.

Impact of COVID-19 on the US Economy It goes without saying that COVID-19 had a major impact on the GDP. In fact, the hit suffered by the US economy in the wake of the aforementioned pandemic has proven to be as big as the one that led the nation to the Great Depression.

What is the Average Economic Growth Rate in the US?

When was the US Economy at its peak?

In the aftermath of World War 2, the USA entered a boom period where it saw its economy skyrocketing. This was due to the fact that by then, the leading industrialized countries had been impacted by the war. The US economy’s peak lasted until the late 1970s.

Is the US Economy growing or declining?

Referring to the US economy in the year 2020, even though the coronavirus pandemic caused the economy to take a major hit, economic reports show that the economic output increased by 33% during Q3, indicating that the US economy is growing and on its way back to the pre-pandemic numbers.