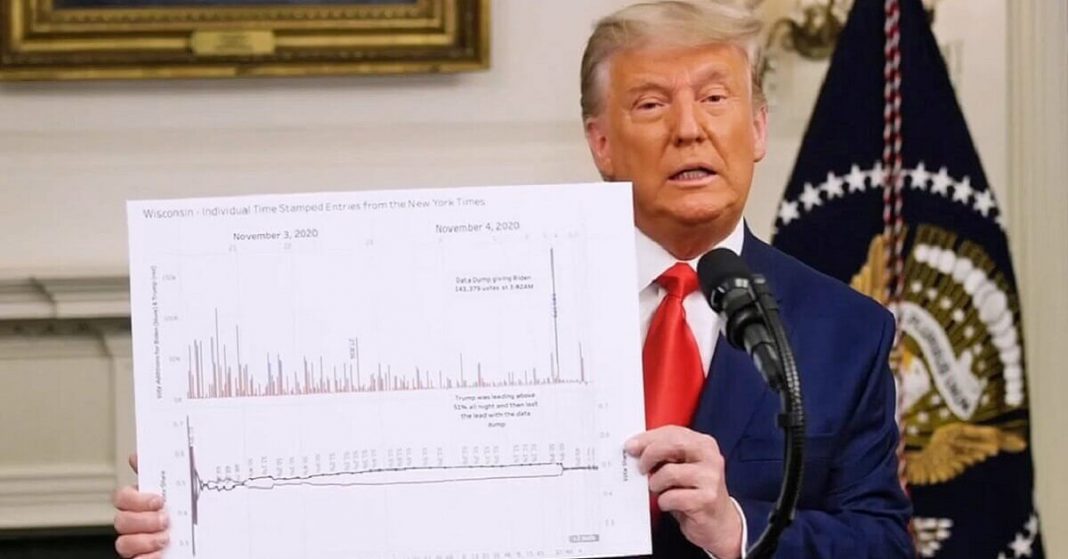 Earlier on Wednesday, President Trump posted a 46-minute long video speech online, repeating claims of election fraud. In what Trump called his “most important speech,” he did not offer anything new but repeated the same claims.

His claims of the November elections being “under coordinated assault” came soon after the clear victory of Joe Biden.

Biden managed to get 306 Electoral College votes compared with Trump’s 232 – a margin similar to what Clinton had faced back in 2016.

However, the sitting president has yet to concede his defeat as he continues to come up with one claim of voting fraud after another. While Biden is busy shaping his cabinet ahead of his inauguration, Trump persists to file futile legal charges in various states.

Various courts in the key battleground states have cast away numerous lawsuits filed by Trump. Moreover, many states have even certified the results.

Trump insists that he is only fighting this battle to restore the faith of his 74 million voters in the election process. In reality, Trump and his lawyers have only cast a shadow of uncertainty over the US electoral system.

What’s ironic is that members of Trump’s administration have agreed that there is not enough evidence to suggest such widespread cheating. In an interview, the attorney general revealed that the FBI and DOJ have been looking into the matter extensively, but have failed to uncover any evidence of fraud.

William Barr also expressed that it is unprecedented to face voter fraud large enough to change the entire outcome of the elections. However, Trump’s defense team clapped back saying that such ignorant remarks showed a lack of insight into the prevalence of systematic fraud.

The director of CISA, Christopher Krebs has been vocal about his trust in the election process. However, a few weeks ago, after he negated claims of fraud, he was fired by Trump.

Gabriel Sterling, who was overlooking the implementation of the state’s new voting system, has warned Trump to stop spreading misinformation or “someone will get hurt” According to top Georgia officials, Trump’s allegations are only making his supporters violent. After the results of Georgia were announced, Sterling had to get police protection around his house due to threats.

Although many of Trump’s allegations have already been debunked, the remaining states are to certify their results by 8th December and would be Trump’s last chance to take it all back.